There are many great benefits associated with residential and commercial grid-tie solar. One of the most popular benefits is being able to produce your own power to reduce what you pay for electricityl, while still having access to utility power for the times when your solar system isn’t producing sufficient power for your needs. But what happens if your solar panels produce more electricity than your home is consuming? This is when one of the most critical solar incentives comes into play; it’s called Net Metering.

What is Net Metering ?

Rather than storing excess power produced by your solar panels in a battery bank for later use, your utility acts as your energy storage system. Any electricity generated that your home isn’t using is sent out to the grid and logged as credits. Net metering is an agreement with your utility that allows you to “store” excess energy produced by your solar panels in their grid in exchange for credits. Then, at night or other times when your solar panels are producing less than your home needs, you pull energy from the grid and any accrued credits are used to offset the costs of your purchased electricity.

How Does Net Metering Work?

Net metering is often referred to as spinning your meter backward, but in reality, a special bidirectional meter records both the KWH you send to the grid and the amount of power you draw from the grid. The difference between the two, the “net” amount, is what you pay for electricity for that period. Net metering credits roll over month to month, but in most areas in the U.S., at “year-end” any unused credits are forfeited. Year-end for net metering in Washington state is March 31, with some exceptions for agricultural uses with some utilities (for example, farmers who run irrigation pumps only during summer). 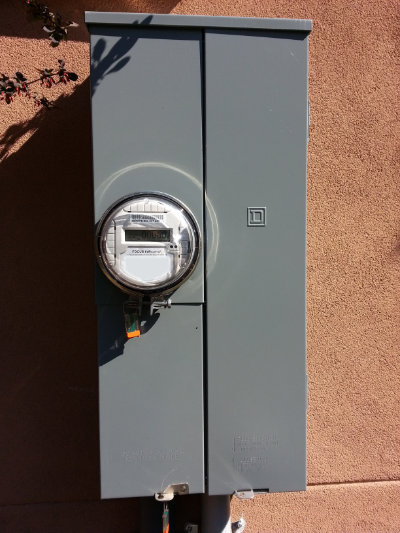 Why is Net Metering Important?

The amount of electricity your solar panels produce may vary throughout the year. In Washington state, our long spring and summer days mean many months of high solar production, but our short and dark late fall and winter months means much less solar production.  Because net metering helps you account for the differences in seasonal production, a properly sized solar electric system can (on average) produce enough electricity to match your home’s electricity use for the entire year, zeroing out your annual electricity costs. However, you will still pay your utility’s fixed base rate which covers their costs for things such as poles and wires.

Net metering programs vary from state to state, and sometimes from utility to utility. Net metering may be a voluntary program of your utility, or it may be mandated by state or local legislation. And be aware that some utilities and/or states may not allow net metering.

Net Metering is a contract you sign with your utility, so connect with them for the terms of their program. Most utility websites have details; look for “net metering”, “customer connected solar” or “customer generation.” Net metering policies can be complex, so make sure you understand all the fine print to protect your right to benefit from the power your system produces.

Read: Solar and Your Utility

Other Types of Compensation for Excess Solar Production

True net metering is a billing structure that gives retail rate credit for all electricity sent out to the grid. Some utilities and states have other compensation structures including:

Read: Is Solar a Good Investment?

Here are links to the net metering information pages for some utilities in Washington state: