What is a solar panel? 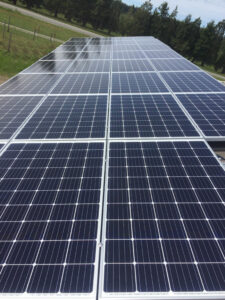 Solar panels are a collection of photovoltaic (PV) cells that convert light from the sun into electricity. PV cells are made of semi-conductive materials, typically silicon. Solar panels generate direct current (DC). Because most consumer electrical products and buildings use alternating current (AC), most solar power systems include a power inverter to turn the DC power into AC power.

What are the types of solar panels?

There are four main types of solar panels: monocrystalline, polycrystalline, Passivated Emitter and Rear Cell (PERC), and thin film. Each type of solar panel has unique features that may make it more appropriate for a specific application.

Monocrystalline solar panels are more popular with homeowners because they have a sleek black appearance. Also, because they are more efficient, it is possible to get more power production per square foot of solar array.

Essentially, a PERC solar cell is simply a more efficient solar cell. PERC cells have an extra layer on the rear side of each solar cell and can convert sunlight into usable electricity more easily. This means more power per square foot than traditional solar panels. Solar cells  with PERC technology also typically perform better in both low-light and high temperature conditions.

Thin-film solar panels are made up of  thin layers of semiconductors deposited on glass, plastic or metal. These layers are hundreds of times thinner than typical silicon cells, making them very lightweight and flexible.

You may have also seen them advertised as “flexible solar panels,” or “stick-on solar panels”. But you’re probably most familiar with them in things like a calculator or solar yard light.

Thin film solar panels are much less efficient than traditional solar panels, up to 50% less. This makes them impractical for most rooftop solar applications where you want to maximize the amount of power produced per square foot. They also degrade faster than crystalline solar panels, meaning they are more expensive over the life of the solar array than other types of solar panels.

What are the STC, PTC and NOTC ratings of solar panels, and why are they important?

When you are shopping for solar panels how much electricity they produce is an important piece of information. Which is why knowing what the STC and PTC ratings are, and what they mean for how much power your system will provide, is critical

When batches of solar panels are made, they are tested to determine how much power they will produce. The nameplate rating (the advertised wattage) is the STC rating. STC testing is done during the manufacturing process, and is determined by carefully controlling light and temperature in the testing environment. STC test conditions are the same across all manufacturers and are usually how the output of different solar panels is compared. Unfortunately, there are two problems with using STC to compare solar panels for real world use.

The first is that STC conditions are “perfect” and will rarely if ever occur in the field. Which means that unless precisely 1,000 watts per square meter of solar light falls on your solar panels, and unless the solar cells and the ambient temperature in your location are both consistently 77 degrees, your solar panels are unlikely to ever product the wattage on the STC/nameplate rating.

The other issue with the STC rating is that even in a batch of solar panels manufactured at the same time, there will be variations in cell efficiency and conductivity. To compensate for these inherent variations, manufacturers set parameters for the range of STC test results that will fall under a specific wattage.

How this looks is a manufacturer might state that each individual solar panel will be + or – 3% of the nameplate rating. This means that if you have 20 solar panels rated at 325 watts, if you tested each one under STC conditions individually they could be anywhere between 315 watts to 335 watts.

But here’s the catch – solar panels are priced by the watt – the higher the wattage the more money a manufacturer gets for each panel. If a solar panel tests at 320 watts, based on the plus or minus range above, this could be sold as a 325 or 330 watt panel (manufacturers always round in increments of 5 watts). So in reality, you most likely will never get a 325 watt panel that tests above 325 watts, but you will get ones that test below it. By rounding up instead of down, they make more money.

Because STC does not measure the effect of temperature change on solar cells, an overly optimistic electricity output results. That’s why PVUSA Test Conditions (PTC), which are more representative of real-life conditions, are generally recognized as a more realistic measure of how much power a solar panel will actually produce when mounted on your house. The PTC rating is always lower than the STC rating,

The PTC formula was developed through a research partnership under the direction of the US Department of Energy’s National Renewable Energy Laboratory (NREL) around 1986. The group was known as Photovoltaics for Utility Scale Applications (PVUSA). Although PVUSA no longer exists, their method of rating solar panel performance was found to be more accurate than the STC rating system and is still in use today.

How many cells should my solar panels have?

Solar panels can vary in the number of silicon cells they have.  Historically the two most common solar panel options available have been 60-cell and 72-cell. But as engineers work to improve the efficiency and aesthetics of solar panels, additional cell configurations are available. Some manufacturers are even using half-cells. So instead of a 60 cell panel they make panels with 120 half cells.

The short answer is: Physical dimensions, weight and power output.

A standard 60 cell solar panels is about 5.5 feet tall by 3.25 feet wide, and weigh about 42 pounds. Panels with 72 or 120 panels are similar to each other in size and weight, at around 6.5 feet tall by 3.25 feet wide and weighing around 53 pounds. The extra 12 inches in length can make a big difference in the design of your solar system. So your roof layout may determine which solar panels are best. But if you have plenty of space, 72 cell solar panels will give you more power per square foot with fewer, making the total cost of your solar system less.

Can I use solar panels to heat my home?

Generating heat from electricity requires a lot of power. So unfortunately it is not practical to directly use PV solar panels to run a heating system.

However, a solar hot water system is an excellent way to heat water for a radiant heating system.

What is the difference between solar panels and building integrated photovoltaic products (BIPV)?

Solar panels are flat panels of photovoltaic arrays mounted on a roof or a pole to capture the sun’s rays. Building integrated photovoltaic (BIPV) materials are PV arrays that are integrated into the building material itself, primarily windows, roof tiles, or walls. Solar panels work well for retrofits or remodels while BIPV are appropriate for new construction or a major renovation.

While both types of solar systems capture energy from the sun, solar photovoltaic uses photovoltaic panels to capture light and produce electricity. Solar hot water, or solar thermal, uses the sun’s energy to heat water for domestic use, to heat a swimming pool, or for a radiant heating system.

Why You Should Upgrade Your Existing Solar Batteries to Lithium

Why Product Reliability is Critical When You Live Off the Grid